Georgetown Cupcake donated 7 dozen cupcakes for Brayden's birthday. How did this happen?! 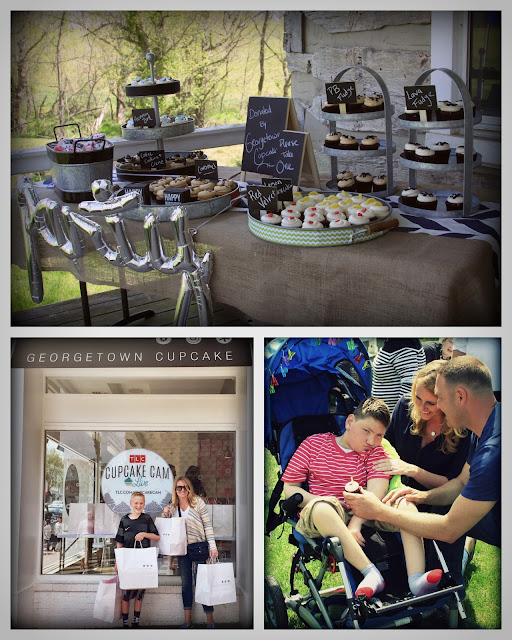 It all started in 2008, we were still trying to understand Brayden's ever-changing needs. We discovered a little cupcake shop (Georgetown Cupcake's original place). Stopping for cupcakes became a part of our DC routine. A day at the hospital...well that certainly deserves a cupcake. Their little pink box somehow added a bit of happiness to whatever happened that day. When Carter and L...uke were little, they had to come along to many hospital and doctor appointments, so why not bribe them with cupcakes?! Then the cupcakes became part of our celebrations for school, birthdays, etc. Well...we may have talked about our cupcake stops quite often so friends (you know who you are) brought us cupcakes, when they happened to be downtown. Our pediatrician even got in on the action, texting us about the secret cupcake of the day when we were downtown (FYI, if you know the secret cupcake, ask for it and it is free).

I knew that if we made it to Brayden's 10th birthday, Georgetown Cupcakes had to be a part of it. Brayden does not eat but he does like the icing. Georgetown Cupcake is just part of our trekking back and forth to DC for many years now. I sent Georgetown Cupcake a message about Brayden's birthday, they replied immediately and offered to comp the order. Their kindness and generosity is all the more reason to love it. I cannot thank them enough for being a part of Brayden's big birthday celebration!
#georgetowncupcake #dccupcakes
Posted by Jenkins at 10:47 AM