Poop in the Diaper 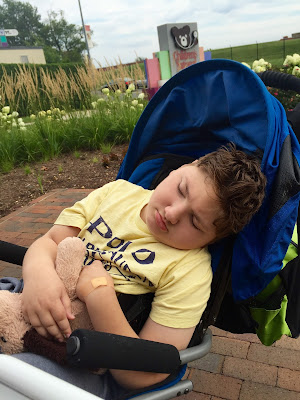 Brayden’s summer had been rather uneventful.  He did attend summer school, Tues-Thurs for the mornings.  Otherwise been at home and a couple of times in the pool.  I try our best to ignore the doctors over the summer.
Brayden had a different plan.  Over the past week, Brayden had stool in his diaper.  Yes, out-of-his-bum-poop.  Poop should only be coming out of his ileostomy not his bum.
Brayden had his ileostomy surgery in Nov, the plan at the time was to remove his colon.  However, due to his instability at the time, the surgeon thought that the ileostomy and colon removal would just be too much.  So Brayden only had the ileostomy done.  We knew that Brayden’s colon still had stool in it (they were not able to flush it all out), we were told to expect the stool to come out at some point.  But stool coming out of his bum 8 months later is not so good.  Three times in the past week, Brayden had a very full diaper with actual poop, which has come along with low grade fever and the fever causes increase in seizures and gagging. 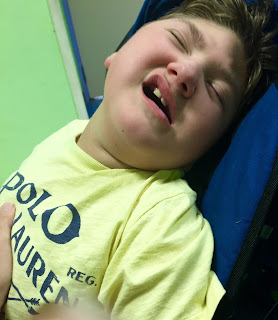 Talking with his GI doctor at Children’s (and his pediatrician), they wanted him at Children’s for x-rays and labs.  So we packed up and headed in late Monday afternoon.  Brayden, his Ms. Stephie and I spent afternoon and evening on the lovely 2nd floor at Children’s, waiting for his turn for labs and x-rays (really waiting for them to find the orders for them).  Then we waited for the results.  The doctors wanted us to wait at the hospital in case more testing was needed or the possibility he would need to be admitted.


Surprisingly, the x-rays and labs came back “normal for Brayden”.  Which is great news but the doctors are NOT at all comfortable with the stool and the amount of stool that we have seen (yes, I sent them pictures).  We brought Brayden home on Monday night around 9:30 (he screamed from the moment we left the house until we got home and finally passed out asleep in his bed).  The GI team wants to discuss things further, amongst themselves, but they don’t really seem to have any answers.
Brayden will remain at home unless we see trouble with his ileostomy or an increase in the fever.
Something is not quite right with him, praying that this is just a little blip/oddity that has always been a part of Brayden’s medical story.
Posted by Jenkins at 12:25 PM

Im so glad you have done a new blog post. Was getting a bit worried. Blessings to you all. From a SN mum from Australia